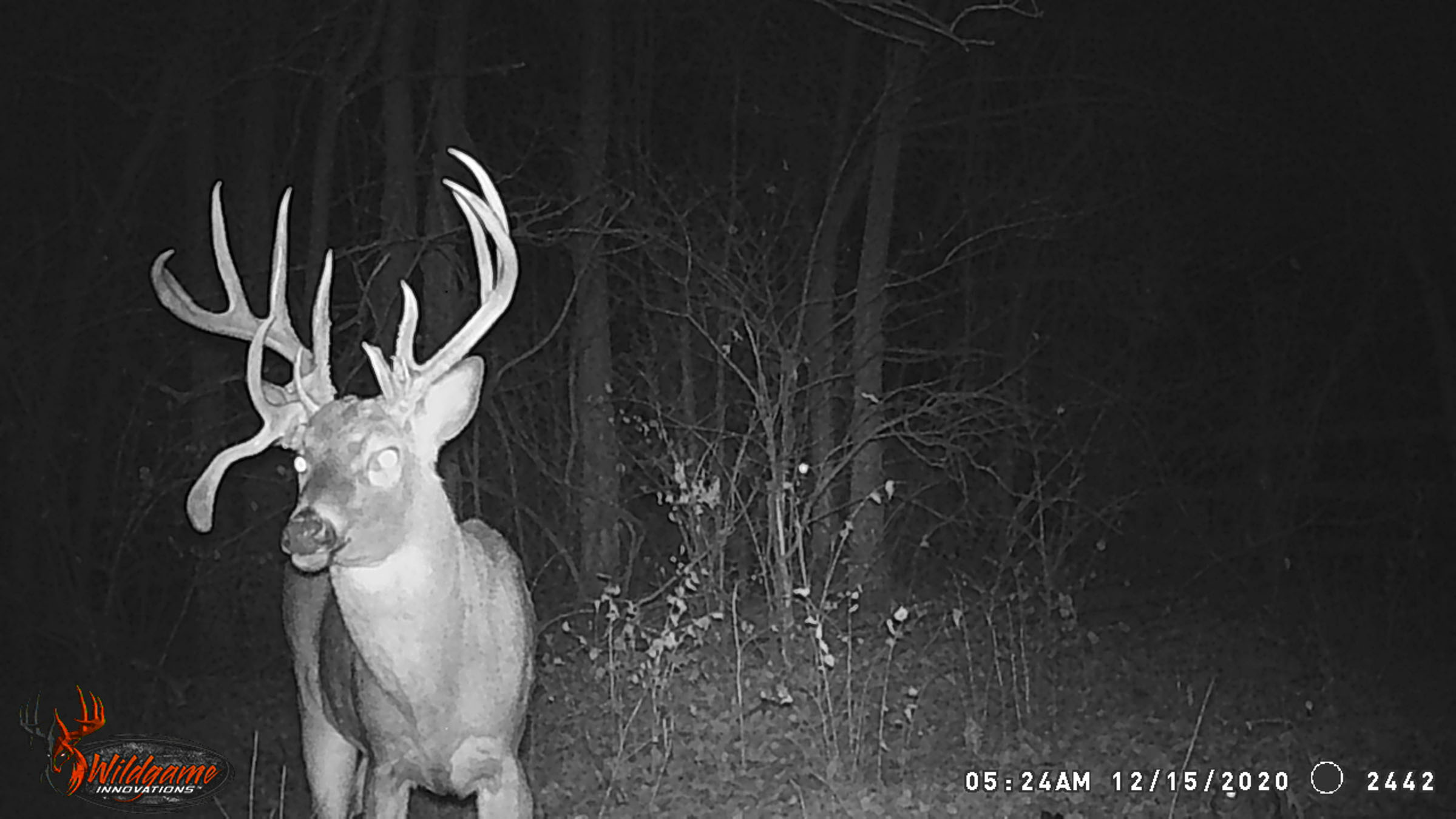 I’ve never shot a deer with a truly atypical rack. I once shot a little buck with only one antler but I figured he was born with a standard rack and had half of it knocked off in a fight. I’ve shot a few bucks with more points on one side than the other but I don’t think that’s considered atypical as far as official Boone & Crockett scoring goes.

But THIS guy has a decidedly ATYPICAL rack, what we would call deformed, like a guy with six fingers on one hand. I owe these wonderful photos to my friend Dave Zumbaugh’s trail cam. Dave lives just outside Shawnee Mission Park in eastern, Kansas where white tails practically outnumber the leaves on the trees. So Dave’s trail cam get’s a LOT of cool shots like these.

My friend Scott’s trail cam photo of a deer answering the call of nature  brings to mind my recent cartoon in the September/October issue of On Wisconsin Outdoors. This poor old doe couldn’t even take a leak in private! 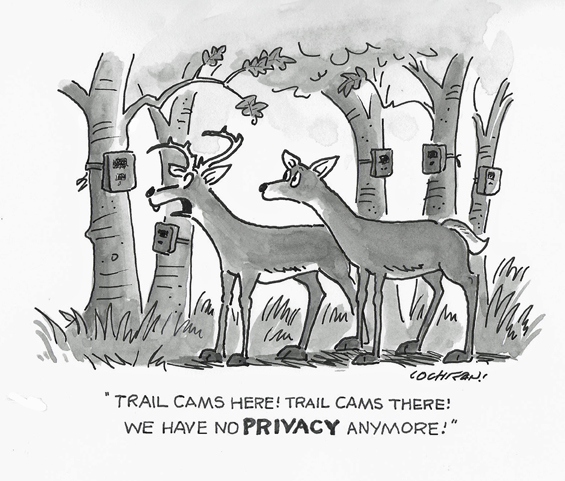 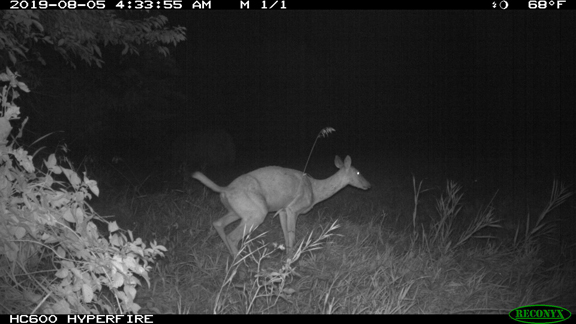 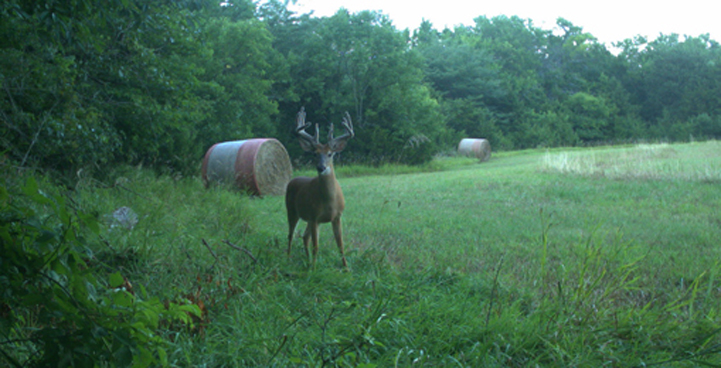 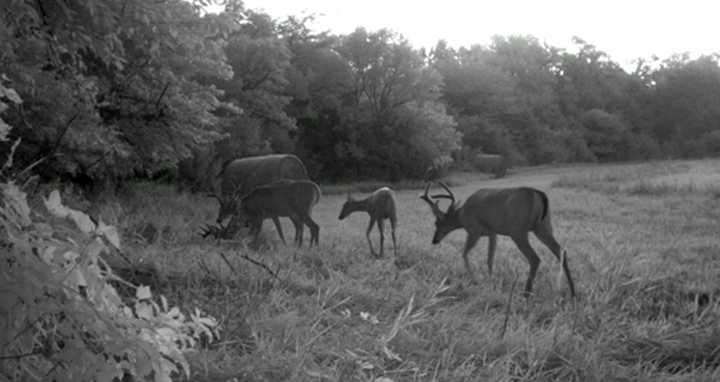 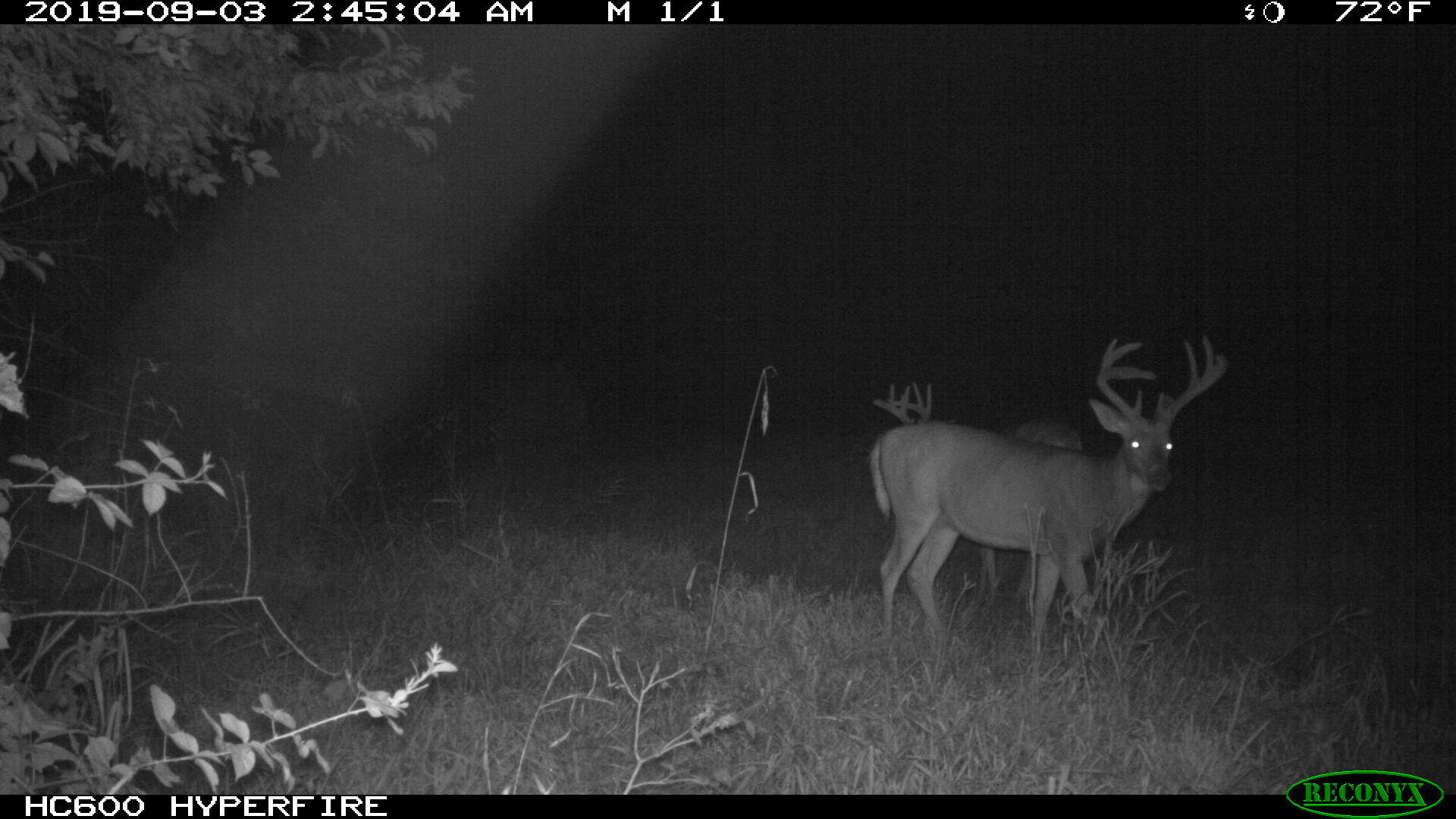 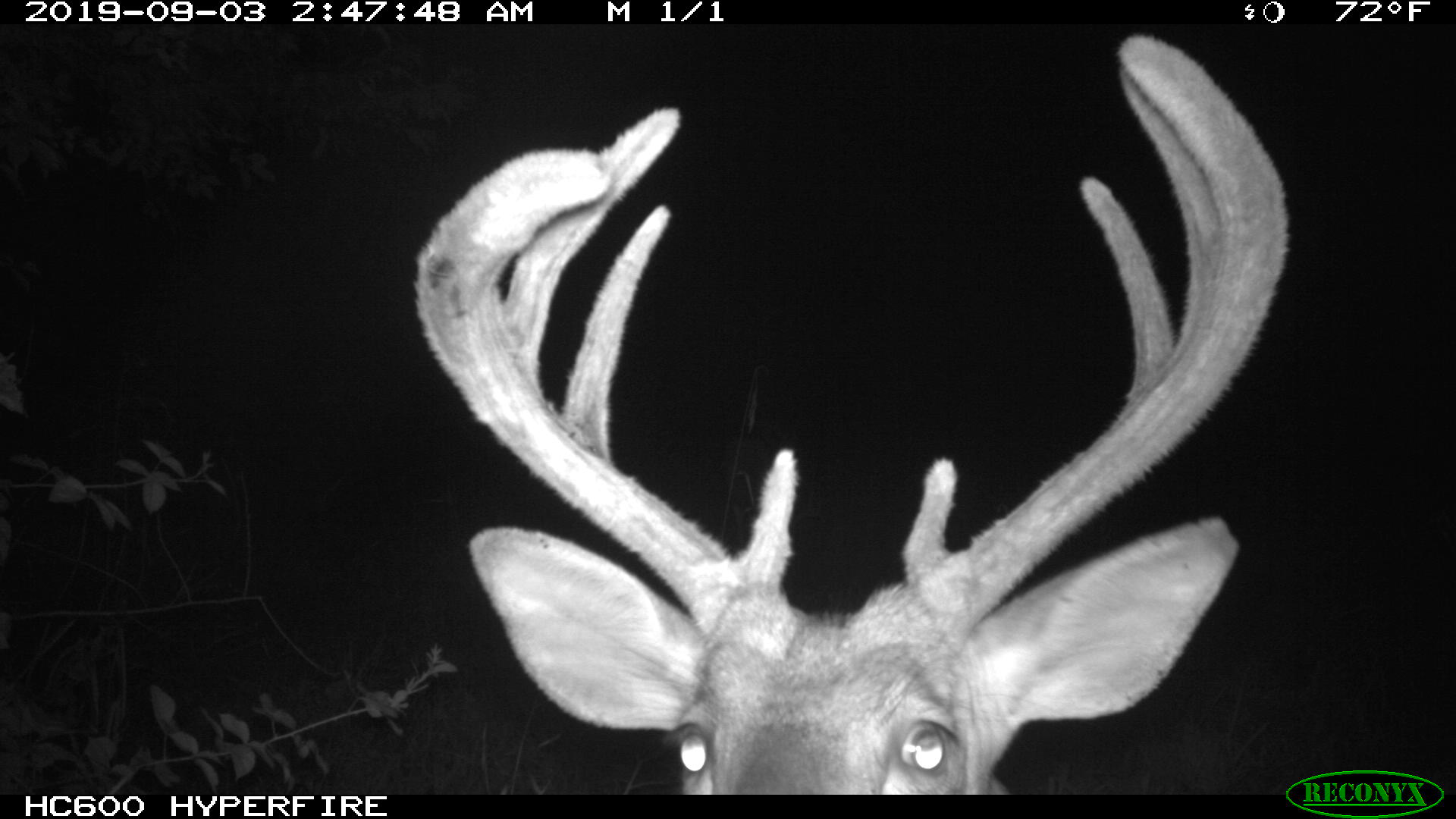 This big nocturnal, Kansas whitetail buck ,  antlers still in velvet, was hard to capture on one of my friend Scott Morgan’s many trail cams. Scott has several cameras scattered over a wide area near his home in eastern Kansas. He’s hoping to get a shot of a cougar that has been sighted in the vicinity. So far no luck on the cougar but lots of deer and turkey. 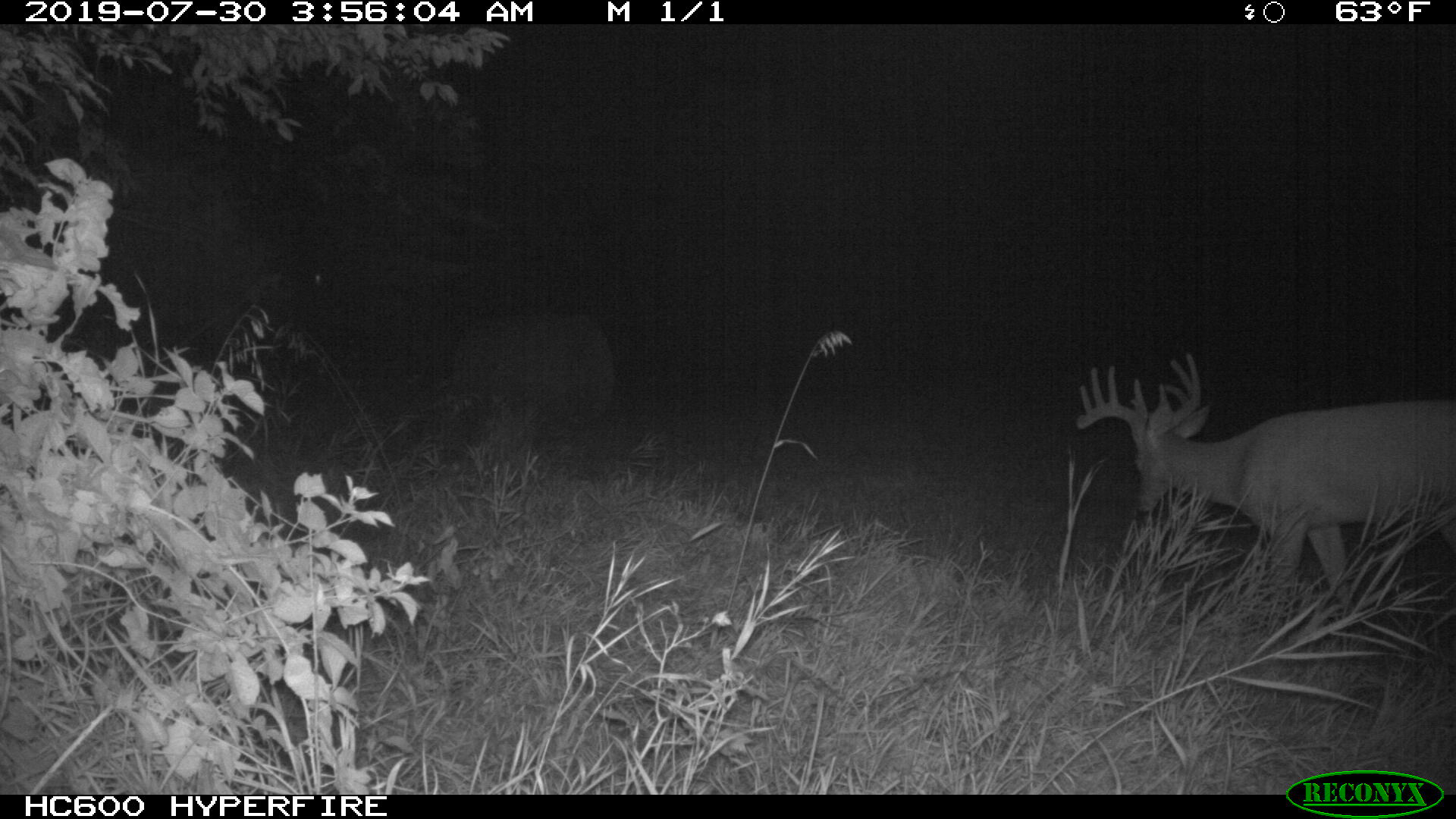 Long time friend and fellow Outdoor Writers Of Kansas member Dave Zumbaugh captured these whitetail bucks with a trail cam in his back yard. That’s right. His back yard! Dave lives in a semi-rural area of Johnson county, KS near Kansas City and is treated to sights like this on a regular basis.

No. He won’t let you bowhunt in his back yard.

Venison recipe: First shoot one deer….This nice northeast Kansas eight point buck fell to  long time friend and fellow OWAA member Jon Blumb. It’s always dangerous for a deer to walk within 40 yards of a guy in a tree stand with a 30.06.

My friend Scott Morgan has several trail cams out and he keeps coming up with photos of big eastern Kansas whitetails. The big guy in the background is probably going to drop his rack any day now. Makes me want to get out there and go shed hunting before the rodents get to them.

“I bagged this bruiser on a trip last week to Ness county –  50 miles north of Dodge City. He won’t quite make the record book, in the mid 160s range. I waited him and a half dozen other whitetails out and took him right at the end of shooting hours on the 2nd day of the season, Dec. 4th. I got him at the confluence of the north and middle forks of Walnut creek. Just a short distance away Custer and 700 of his best friends camped in 1867. They eventually ended up at the Little Big Horn…”

It’s that time of year again. Scott Morgan of Baldwin City, KS has been busy with his trail cam and has come up with this beautiful photo of a fine white tail buck. Now you guys who are still young enough to climb up into and out of a tree stand get your butts out there and bring home some venison!